Established in the 17th century, Morristown grew as a travel destination known for its history, art and food. The township of Morristown was chartered in 1781. According to records, by 1791 there were twelve inhabitants including two Native Americans. By 1795, there were enough people to establish a tavern, the first school, a town house, and a brick church. Today, the Noyes House Museum (c.1796), Morristown Centennial Library (c.1913), Morrisville Rail Depot (c.1872) and the First People’s Academy (c.1847) all stand in Morrisville as important landmarks.

The area of Morristown is approximately 50 square miles. Of this area, the town is predominantly forested lands, agricultural lands, and residential and business areas. Morrisville is the heart of Morristown. It is home to most of the community economy and activity. Copley Hospital is located just outside the village. The hospital offers many medical services and senior housing. Morristown has maintained its small town character with a downtown hub of activities for locals and visitors. With many food and shopping options throughout the town, there is also a large industrial section. Morristown has emerged as a classic Vermont destination for history, art and food.

World-famous commercial industries are based in Morristown. Concept 2 builds rowing equipment and oars that are used around the world. And, Hearthstone Stoves is a leader in soapstone wood burning stoves. The brand Turtle Fur creates the best headwear and outdoor gear you can buy.

As we enter into Vermont’s fifth season, also known as mud season, there are many stories to be told. It’s the season when we welcome longer days, more sunshine and the anticipation of the coming gardening season. As we travel the Green Mountain Byway there is not a...

END_OF_DOCUMENT_TOKEN_TO_BE_REPLACED 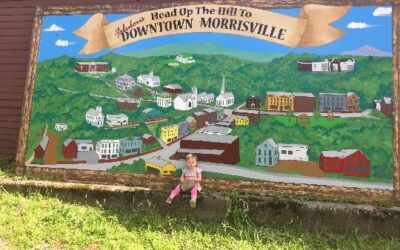 Submitted by: Tricia Follert, Morristown Community Development Coordinator Traveling the Green Mountain Byway you’ll come across lots of spectacular views, from mountain peaks to quaint villages and towns and there is always something to do. With school starting in a...